How to: Make The Piute Dead-Fall Trap

The "live-capture" version of the Piute Trap, pictured above, is the first trap I ever set after my Tracker School Standard class. It was set up to trap a squirrel that came in the house basement through the chimmney and was hopelessly trapped inside the house.

It took some coaxing from my then wife to give it a try, because I didn't believe in the new skills I had just learned. But, 2 days of the little critter trapped in the house trying to snatch our storage food convinced me to give it a try...

It actually worked! No surprise though, I baited it with pizza. (Squirrels are suckers for pizza and peanut butter). Chalk one up for primitive survival skills!

This mechanical trap is a faster (more sensetive) version of the Figure-4 Trap. The piute trap has a multi-directional trigger in that in order to trigger the trap the quarry can move the trigger-stick up, down, left, or right. Unlike the Figure-4 it uses up to 10" of cordage. However, it uses light cordage (some threads unraveled from clothing and twisted together will usually work quite well) so no great effort is needed to obtain the lashing needed to make this trap effective.

The bait is placed on a long thin horizontal bait stick. This bait stick is held at both ends by friction. When the bait stick is moved, it slips off of the short trigger stick that the cordage is tied to (wrapped around the vertical stick). This allows the weight to fall. Be careful to place the deadfall so that it does not land on the vertical stick. 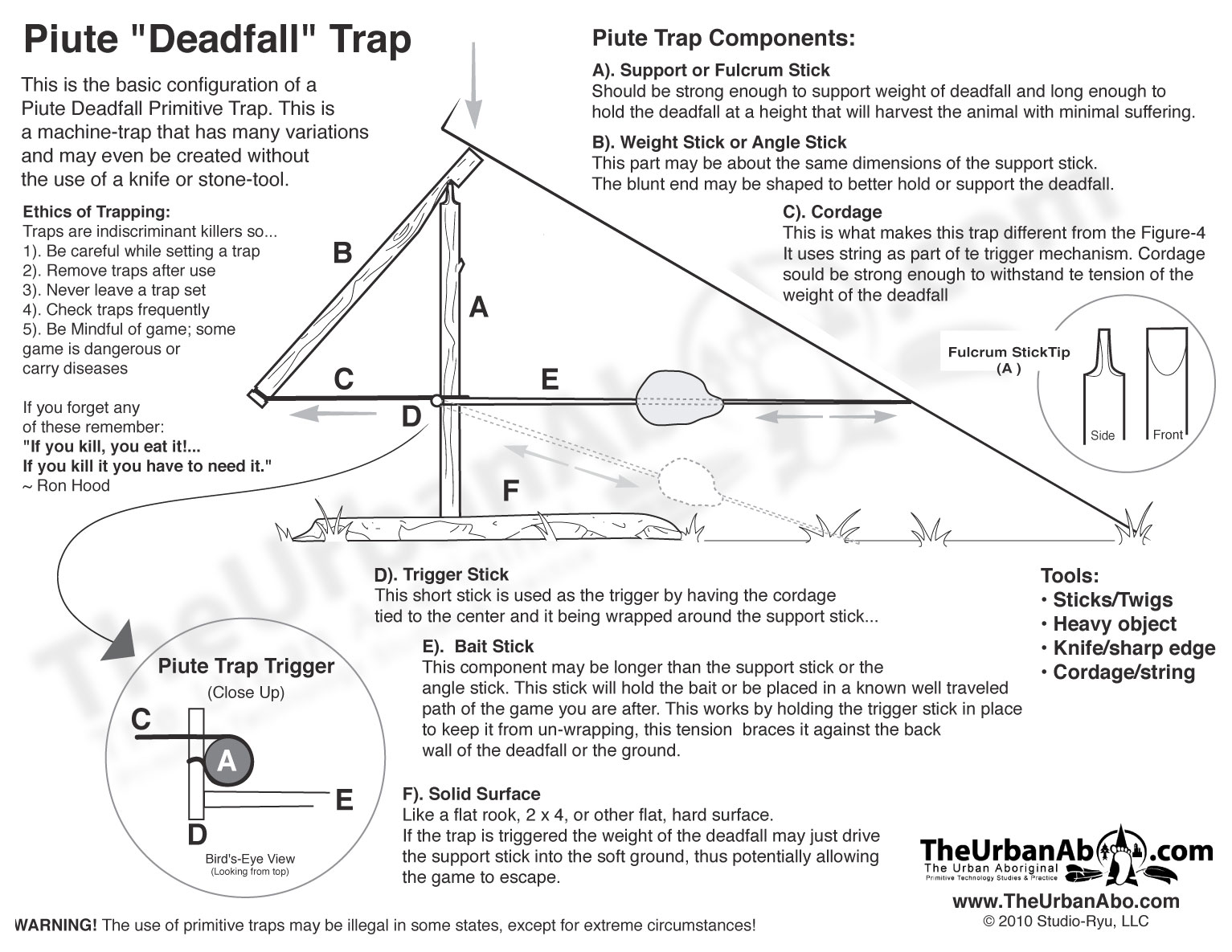 NOTE: In a serious survival situation setting traps for anything smaller than a chipmunk may not be worth the caloric effort of setting up the trap.

WARNING: Most primitive traps are illegal to use in most states. Unless under a life-or-death survival situation it is not recommended that you use them.

SORRY - There are no steps for this How-To. Please check back later. Or drop me a line at TheUrbanAbo@gmail.com to let me know you wanna see this one fleshed out.

HIGHLY RECOMMENDED!
Get your copy TODAY!